View source
watch 01:36
We're Getting Mutants in the MCU - The Loop
Do you like this video?
Play Sound

Imperial Coalition of Maltese Knights also known as ICMK is a coalition originally founded in Terra on the 13th of September, 2020 as Knights of Malta {KoM} by Duluth with the aim of establishing a community based on the belief and customs of the real life Knights of Malta.

Imperial Coalition of Maltese Knights {ICMK} practices a semi constitutional monarchical form of government where the monarch rules according to a democratic constitution but still retains substantial powers.

ICMK's Government consist of the Administrative arm, the Legislative arm and the Judiciary arm. The Judiciary is considered to be a detached body from the ICC while maintaining the same level of power and respect with the remaining arm in ICC in order for the body to be free and independent when it comes to interpreting the law and constitution of the alliance and also settling disputes according to thee law provided. The Parliament carries out their duties as stated by the official constitution of the coalition while serving as a support to the Imperial Leader and the coalition at large when it comes to law making, adoption and removal in order to ensure the coalition's affairs are running smoothly and effectively. The stated arms of government and the imperial leader combine excluding the judiciary arm is known as the Imperial Central Council [ICC], a body within the coalition that serve as the highest authority and formulates policy for the coalition's growth and survival while the Governing Officiating Council [GOC] serve as the channel between the squires, knights and the ICC.

The Administrative arm of the government, a sub council in ICC is headed by the Prime Minister with the support of ministers and GOC officials.

ICMK has 5 core Ministry that diverse functions to promote the success of coalition and its survival in Dennis. This arm of government deals with activities as stated in the coalition constitution.

The Ministry of Internal Affairs Coordinates the internal issues/affairs of ICMK, it is regarded as the heartbeat of the coalition as it gets involved in the development of loyal, law abiding, active, and strong knights. It is led by the Minister of Internal Affairs who is assisted by the Deputy Minister and other department heads and staff.

The Ministry currently operates with the existence of 4 major departments.

The Ministry of Defense Affairs oversees the defense affairs of ICMK, The Ministry deals with the coalition security and makes sure our territory is well defended from those that considers us a target. It is led by the Minister of Defense and assisted by the Deputy minister and other military officers.

Ministry of Art and Technology [ArT]

The Ministry of Art and Technology deals with every matter that concerns the creation of art designs and technologies such as bots and other tools for the coalition's use.

The Dawn of Imperial Coalition of Maltese Knights {ICMK} in Dennis;The Reign of Emperor Daviesolu

Daviesolu who was previously a member of Polaris in NaR decided to leave the alliance due to the state of the alliance after the war and with this singular decision lead to the establishment of a coalition that has already declared its existence in a similar nation's simulation game.

ICMK without any diversity in structure and ideas from the ICMK in the other world was established in Dennis by Daviesolu the first Emperor of the Coalition in both worlds on the 25th of May, 2022.

Hours after the establishment of the community, ensuring the protection of the alliance while setting the foundation of the coalition to seek a stable rise without much interference, Daviesolu discussed signed a protectorate treaty with the AlmightyGrub, the Emperor of Polaris. Slowly gaining members but steady at it, ICMK

The Parliament, a sub council in ICC that consist of the speaker and his running mate (the deputy speaker) and five Senators which is increased based on the member count of the coalition and mainly the political regions. They are voted into power by knights during elections to represent the interest of knights in the legislative arm of ICMK's government.

The Judiciary arm of ICMK is the only high government faction that is not in the imperial central council [ICC] in order to increase the rate of transparency within the judiciary arm of ICMK, This Arm deals with the interpretation of the law. The Emperor is the leader of the Imperial Court that is limited to giving final decision on any trial after it has been concluded and assisted by the Chancellor who carries out the primary duties in the Imperial Court.

Elections within the coalition is coordinated and handled by the Imperial Electoral Committee [IET]. There are 2 types of election that takes place in ICMK, namely;

1) The Parliamentary Election and;

The Parliamentary election is to occurs a day before the general election where each candidate from the 5 political region are voted in by the region members that supports them to represent the region in ICC. While the General Election occurs a day after the parliamentary election where the general populace of the alliance exercise their right to choose who to become the next Prime Minister and Speaker of the Parliament who is elected in with his/her running mate. Both registered political parties are to register their candidates in due time.

The official flag of Imperial Coalition of Maltese Knights {ICMK} hoisted during a war. 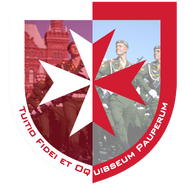 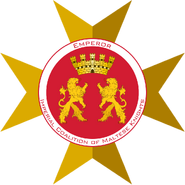 The Emperor's Seal otherwise known as the Royal Seal. Every official ICMK document has this to confirm its authenticity.
Community content is available under CC-BY-SA unless otherwise noted.
Advertisement