Digital Dopamine is, at the moment this page is written, the leading alliance in terms of score in Nations at Risk. Digital Dopamine was first established outside the game in July 2020 by DeDe, in the game Affairs and Order, then much of it moved in NaR where it rose to power after a series of successful treaties and wars.

There is no official charter (yet), the De Facto powers is as follows:

Digital Dopamine was first established outside the game in July 2020 by DeDe, in the game Affairs and Order. Due to lack of progress on the production of AnO however, much of the AnO DD membership flocked to NaR.

Digital Dopamine was established in March of 2021 in Nations at Risk by Will King, where it quickly became one of the game's fastest growing alliances, reaching 2nd spot in terms of membership. It was at the 23rd of April 2021 where a Mutual Defense Pact between Digital Dopamine and the United Warriors of Freedom was signed, after an announcement by Spartan about a new war update which would allow the top 20 players to attack 5 people above or bellow them score wise, even if they were not previously in range. The update eventually led to The Awakening, a war between the Guardians of the Galaxy (the then top alliance in membership) and the forces of the Digital Freedom Mandate. After the conclusion of the war, UWoF and Digital Dopamine merged, making Digital Dopamine the top alliance in membership and score at the time

Currently, Digital Dopamine stands at the first place of the alliance leaderboard in terms of score.

Notable members of this alliance include, but are certainly not limited to DeDe, Will King, Tutnix, DragonKnight1998, Blitz, IamCheems, Burg_er, Titan, Eclo and many others, whose contributions lead the alliance forth.

To date, the Heads of Internal affairs have been Eclogronio and Will King.

Milcom is currently led by DragonKnight1998. Its task is to prepare Digital Dopamine for the inevitable conflicts that transpire in a Nation Simulator. From developing strategies, to creating doctrines, to familiarizing members to the Art of War and setting the stage for a defense or offense, Milcom aims for nothing less that victory on the battlefield.

To date, the Heads of Military Command are Dungeon Nerdy and DragonKnight1998.

Digital Dopamine's Economic Department is currently led by IamCheems. The Head of economy is responsible for analyzing the economic growth of the alliance, creating various economic programs to stimulate said growth and maintain a strong alliance bank. Due to the nature of the department, Econ often works with other departments like Milcom, for the purpose of ensuring adequate war preparedness when it comes to supply of materiel.

To date, the Heads of Economy are Blitz and IamCheems.

The current Head of Foreign Affairs is Titan. The main task of the department is to maintain contact links with other alliances in the game, analyze the political climate of the game and solve any and all issues and tasks through negotiation and communication. For unknown reasons they give weird names to various pacts and every department secretly loves it (but do not tell them).

To date, the Heads of Foreign Affairs are Burg_er and Titan.

Digital Dopamine in its lifetime has been part of the Digital Freedom Mandate, before it fused with UWoF. Right now, it is not part of a bloc. 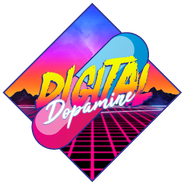 The flag of Digital Dopamine, a work of art, and a long standing symbol of pride for any DD member.

Community content is available under CC-BY-SA unless otherwise noted.
Advertisement